Many years ago coerulea hybridizing was considered to be a dead end.  There were not many options to start with, hybridizers were limited to Phal. violacea var coerulea and Phal. pulcherrima var coerulea as a source for the "blue" color.  They quickly found that breeding almost anything outside of these two specific forms resulted in 100% magenta flowers.   There were a few happy accidents where successful pairings happened outside of these two species, but even then subsequent crosses would result in more magenta flowers.  This lead to the perception that coerulea hybridizing was a dead end that could not progress.  The big mistake at the time was trying to apply standard Mendelian inheritance to these lines of breeding.

We now understand more about the genetics and inheritance and it is not as simple as just dealing with dominate and recessive traits.  The coerulea form is created by mutations in the Anthocyanin pigment pathways and those mutations are effectively errors that are easily fixed when a parent with a complete Anthocyanin pigment pathway is introduced and/or a coerulea with a different mutation.

What we have found is different coerulea mutations are generally not compatible with each other unless other genetics are introduced that stabilize the mutation.  That is easier said that done, so it's generally important to understand the different groups of coerulea mutations and the related compatibility in order to successfully plan out coerulea crosses.

This means that breeding pulcherrima and standard coerulea violacea hybrids with indigo violacea lines is mostly impossible without some extra help. 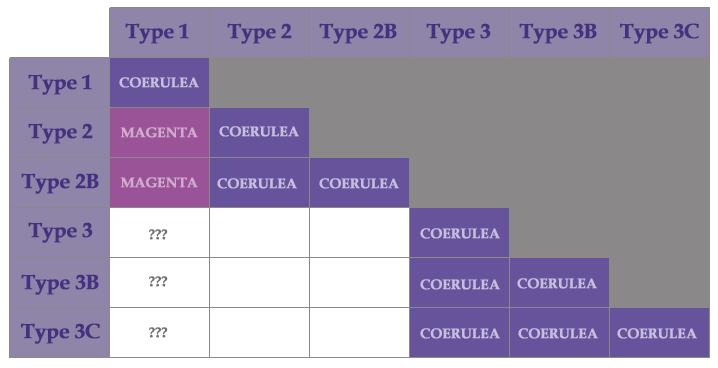